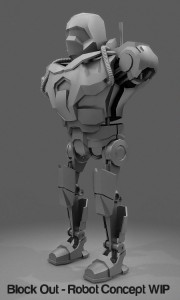 My next project for the demo-reel is going to be a hard-surface robot character. Up until now I’ve just been studying references and exploring the design, so it’s nowhere close to being finished.

Before starting this I did a little research for tools/plugins that would make modeling a little bit easier. The holy grail to me was something called the inset-tool. This is a modeling tool you’ll find in pretty much every 3d modeling software, except blender. Blender 2.49 had a plugin made by Dolf Venverliet, but it wasn’t compatible with 2.5.

I have searched after this plugin for littorally more than a year without success, until I stumbled on a plugin by the very awesome Chromoly! It’s called “Shift face outline”, and its part of Chromoly’s “Vertex align” addon. Sadly it’s not compatible with blender 2.57, but I have found a build from Filiciss that includes a working copy of the script.
http://www.graphicall.org/builds/builds/showbuild.php?action=show&id=1536